Semih Erden (born 28 July 1986 in Gaziosmanpaşa, Istanbul) is a Turkish professional basketball player with the Boston Celtics of the National Basketball Association. The 7 ft 0 in (2.13 m), 240 lb (110 kg; 17 st) center plays for Boston Celtics. He was selected by the Boston Celtics with the 60th overall pick in the 2008 NBA Draft
2003–04
Erden played with Darüşşafaka S.K. in the Turkish Basketball League, appeared in one game in which he recorded one point and two rebounds. He spent the majority of the season playing with the Darussafaka junior team.
2004–05
With Partizan Beograd in the Adriatic League, Erden averaged 4.6 points and 3.2 rebounds. He scored in double figures twice, tallying a high of 17 points against KK Hemofarm. In the Euroleague, he contributed 3.0 points and 2.3 rebounds per game in 12.5 minutes a contest. His highest scoring game of 10 points occurred against Efes Pilsen. In 2004-05, he also appeared in seven YUBA Liga games, averaging 1.7 points and 0.7 rebounds in 4.4 minutes a contest. 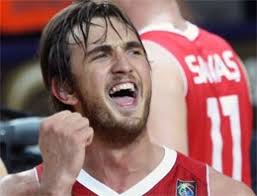