SUMMARY:
At the gladiator school in Capua, Spartacus begins training under the brutal Marcellus (Charles McGraw). We get a training montage. Spartacus makes a love connection with a servant named Lavinia (Jean Simmons). Crassus (Laurence Olivier), the richest man in Rome, arrives with two “ladies” who insist on watching pairs fight to the death. Spartacus loses to “the big black one” Draba (Woody Strode) who inexplicably tries to kill Crassus and is himself dispatched by a “brilliant dagger stroke”. The resulting bad blood leads to a rebellion in the kitchen with Marcellus finding out the soup is not always good food. 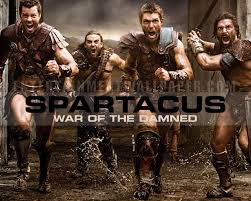 Spartacus halts the pairing of Roman nobles, swearing he will never witness a gladiator match again. He convinces the rebels to form an army and battle their way out of Italy.Slaves join up from the countryside and the “army” encamps on the slopes of Mt.Vesuvius. When six cohorts of the Roman garrison approach under the command of Crassus' boy Glabrus (John Dall), Spartacus ambushes his unsecure camp (off screen unfortunately).
Back in Rome, Crassus has dreams of bringing law and order to the untidy democracy of the late Republic. A dictatorship would be more efficient and guess who he thinks the dictator should be. Representing that democracy is the portly Senator Gracchus (Charles Laughton) whose hedonistic lifestyle represents the immorality of democracy. He is determined to thwart the power-hungry Crassus. The slaves are on the move and defeat several Roman armies off screen. Spartacus and Varinia smooch enough to get Varinia pregnant. A pretty slave youth named Antoninus (Tony Curtis) who does magic and sings songs joins them. He had escaped Crassus' villa after deciding that he does not like snails and oysters. The rebels make contact with Cilician pirates and make a deal to get passage out of Italy.In Rome, Crassus wins the power struggle with Gracchus and gets himself appointed dictator to deal with the slave menace and restore patrician authority. He pays off the pirates to abandon the rebels at the port of Brindusium. When Spartacus learns of the betrayal, he determines the only strategy is to march on Rome and confront the lion in its den. He gives a heartfelt speech to his mob emphasizing the value of freedom. The scene jumps back and forth to a speech given by the pompous Crassus to his robotic legions. He lauds the old Roman virtues of discipline and patricianness and promises the head of Spartacus. The climactic battle is epic. Kubrick used 8,000 Spanish soldiers for the legionaries. They ominously approach the mass of rebel warriors (men and women) in their famous checkerboard formation. The rebels are supposed to be intimidated, but they have a trick up their tunics. Fire rollers! (Future epic movie makers take note. Fire is cool.) The velites panic and then Spartacus leads a mass assault that threatens to swamp the legion. While Crassus leads from the rear, Spartacus is in the thick of the fighting and even severs a soldier's arm in the only graphic moment in the scene. Things take a turn for the worse when two other Roman legions arrive to doom the rebels. Cut to a field strewn with corpses.
Varinia is taken by Crassus and shipped to his villa. He is determined to identify Spartacus and feature him in his triumph. An offer of leniency to the slave who fingers Spartacus results in the iconic “I am Spartacus!” scene. They refuse to name names (“get it?”, says the blacklisted Trumbo) so the survivors will be crucified along the Appian Way. Gracchus (his name is at the head of a list of the “disloyal”) also refuses to kowtow and kiss Crassus' ring (“get it?”, says Trumbo). Before he has a rendezvous with a dagger and a bathtub, he gets Batiatus to rescue Varinia and her baby
İngilizce Performans Ödevi
Posted by ingilizce ödev yardımcısı on Ocak 09, 2014