The Euphrates river (Firat in Turkish ) rises from Eastern Anatolia , flows generally southward through southeastern Turkey around Sanliurfa , Adiyaman and Gaziantep provinces, goes across the border into Syria and Iraq passing from Mesopotamia, and empties into the Persian Gulf in Basra after joining with the Tigris river in Shatt al-Arab. Its total lenght is approximately 2.800 km (1.740 mi), out of which 971 km (603 mi) are in Turkey . In addition to its main watercourse, the Euphrates River has two headwaters named as Karasu and Murad (ancient Arsanias) rivers which join somewhere near Keban district of Elazig province , where stands the Keban Dam as one of the biggest in Turkey (210 m – 689 ft high) built between 1965-1975. Another big dam is Karakaya (173 m – 568 ft high) which was opened in 1987 within GAP Project , and other dams are Birecik and Karkamis. But the largest dam of Turkey in size, and one of the biggest dams in the world, is Ataturk Dam which is also built on the Euphrates river near Sanliurfa province between 1983-1992; it’s 169 m (554 ft) high. All of these dams were constructed to provide hydroelectric power to this region of Turkey , provide water for irrigation, and help with flood control. These dams have very large and distinct reservoirs as well.The water from the Ataturk Dam is passing through two parallel 7,62 m (25 ft) wide and 26,4 km (16,4 mi) long Urfa tunnels and used for the irrigation of the agricultural fields in Urfa – Harran , Mardin-Ceylanpinar, Siverek-Hilvan, and upper Mardin areas.Besides Karasu and Murat, other tributaries of the Euphrates are Tohma, Peri, Calti and Munzur rivers. Average elevations along the Euphrates range from 760 m (2.500 ft) for the lowlands to more than 1.500 m (5.000 ft) for the plateaus and mountains . Its water regime depends heavily upon winter rains and Spring snowmelt in the mountains ; it grows between March-June when the snow in the mountains melt, and reduces its water flow between July-January when there isn’t much rain due to the typical continental subtropical climate (hot and dry summers, cold and snowy winters). 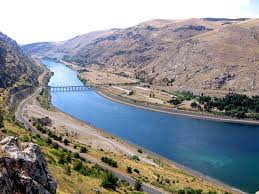 The agriculture along the Euphrates holds an important part in the economy of the region , which comes to a halt during the winter because of freezing temperatures and snow. Fishing is another important income for the locals living around the Euphrates. As for the fish and other animals in the river and marshes, we can count the carp, barbels, catfish, spiny eel, frogs, toads and turtles. Several plants grow near the rivers in the region , such as oak, pistachio, ash forests, cattail, mardi reed and other reeds, camel thorn, prosopis, willow, popler, date palm, and some wildflowers.Many ancient cities flourished on the banks of Euphrates river during the Hittite and Urartu periods, Zeugma city was one of them. The Euphrates, such as Tigris , is a biblical river as well. It was known as Perat and mentioned in the Book of Genesis (Genesis 2:10-14) as one of the four rivers branching off the river flowing out of the Garden of Eden. These four rivers were Pishon, Gihon, Hiddekel ( Tigris ) and Perat (Euphrates).
İngilizce Performans Ödevi
Posted by ingilizce ödev yardımcısı on Ocak 16, 2014