Living in an atmosphere of repression and fear since Scotland has been conquered by England, William Wallace (Mel Gibson) and Murron MacClannough (Catherine McCormack) wed in secret so that Murron doesn't have to fall victim to the English priviledge of Primae Noctis, the right for the English lord to take a newly married Scottish woman into his bed on her wedding night, King Edward Longshanks sadistic attempt to "breed" the Scottish out of them.

After an English soldier tries to rape Murron and Wallace escapes, the village sheriff publicly executes Murron by slitting her throat, proclaiming "an assault on the King's soldiers is the same as an assault on the King himself." In retribution, Wallace and several villagers slaughter the English Garrison, and Wallace executes the sheriff in the same manner that he executed Murron: slicing his throat. Now Wallace has no choice but to fight against the English, who have taken his wife and country.

Immediately following a ceremony in Edinburgh where Wallace is knighted Sir William Wallace and appointed "the guardian and high protector of Scotland", the other nobles begin bickering amongst themselves. Upon seeing this, a disappointed Wallace addresses the nobles, explaining that in order to ensure freedom to the people of Scotland, he will now "invade England and defeat the English on their own ground." Outside the council, Wallace tells Robert the Bruce that if Bruce would just lead them to freedom, people would follow, Wallace included. 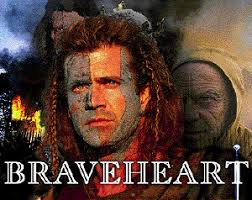 As the Scots are losing the Battle of Falkirk against the English army led by King Edward Longshanks, Wallace breaks ranks and charges toward Langshanks to kill him, but he is intercepted by one of the king's hooded lancers and knocked from his horse. When the lancer dismounts to examine the fallen Wallace, Wallace gains the upper hand and is set to kill him, but upon taking his helmet off, Wallace discovers his opponent is Robert the Bruce, his alley and contender for the Scottish crown.
5. THIRD ACT TWIST
Wallace is taken to the Tower of London for his torture and execution. He refuses to submit to the king and beg for mercy despite being half hanged, racked, castrated, and disemboweled publicly. Awed by Wallace's courage, the crowd watching the execution begins to yell for mercy, and the magistrate offers him one final chance for mercy. Using the last strength in his body, the defiant Wallace shouts, "Freedom!"
İngilizce Performans Ödevi
Posted by ingilizce ödev yardımcısı on Ocak 09, 2014