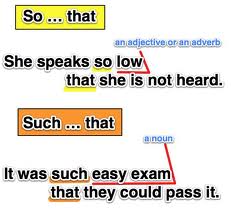 So + adjective + that
Taner was so excited that he couldn’t sleep  last night.
Cinderella is so beautiful that Prince falls in love with her.

So+ adverb+that
You are walking so slowly that we will miss the meeting.
Our teacher speaks so fast that I can’t understand him.

Such + adjective + noun + that
He spoke for such a long time that people began to fall asleep.
They are such  careful students that they rarely make mistakes.
He writes with such great care that he rarely makes mistakes